Have you been scammed? Scams are ubiquitous these days with the advent of electronic communications and internet banking the field is endless for scammers to get to work on the vulnerable or the gullible in our community. 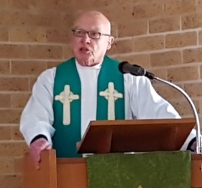 The fact that scamming is a very profitable business entails that there is now a host of strategies by which people are encouraged to use to avoid being fleeced of their hard-earned cash. But one thing we learn from scammers is that they are single minded in conducting their business. They don’t give up easily but continue to try and deceive you. They are single minded in their nefarious endeavours.

There are many parables in the gospel which indicate that the children of this world are more alert to their situation than the children of God. They can make decisive decisions in the light of the situation which confront them. Here in this parable a steward of a certain rich man has been told that he has been found out defrauding his employer. So as is the usual custom for the children of this world he immediately decides to secure his future by making friends with some influential people who are customers of his employer. Immediately, he sets about doing some creative accounting. Loading up their invoices with goods for which they don’t have to pay. This is a common case of fraud and it is not unusual today to read of similar situations in the commercial life of the community.

But what is remarkable about this situation is that Jesus praises the action of this fraudster and He does so on the basis that he is very much alive to the situation in which he finds himself. He is about to get the sack and so he sets about securing his future by his unlawful action. He knows how to secure his wellbeing in the changed circumstances of his life that are about to happen and makes a decisive decision to abandon his previous way of living and become a fraudster without any compunction or guilt but with a single eye on his self-preservation.

The point being that this crook is more alert to his situation than those who are eyewitnesses of an event the equivalent of which is the creation of the world. These are the people who see and hear Jesus the Son of God who has come into this world to redeem it from corruption by allowing Himself to be made one with their sin that they may be forgiven and renewed by God. This miracle of grace, the incarnation of the eternal Son of the eternal God, is not acknowledged by these people since He appears to be just another itinerant teacher that can be assessed, debated or ignored depending on our whim or inclination. This parable concerns the situation of the church in the time between the first and final appearing of its Lord. This is the time when Christians grow weary and ask themselves whether it is all worthwhile. Wouldn’t it be easier simply to go with the flow and forget about the faith, we are all in the same boat, aren’t we are all going the same way? This problem of uncertainty, and indecision about our relationship to God’s act of redeeming grace in Christ, whether there is anything in it, is a manifestation of the brokenness of the relationship between God and ourselves in Christ.  It echoes the suggestion of the serpent in Gen. 3 to the effect of introducing an element of uncertainty in the relationship between God and humankind.  “Did God say?”

Another saying of Jesus’ tells us the same thing. The single eye (Mat. 6:22, 23 “The eye is the lamp of the body. If your eyes are healthy, your whole body will be full of light. But if your eyes are unhealthy, your whole body will be full of darkness. If then the light within you is darkness, how great is that darkness!”) the single eye or double vision is that which defines the wholeness and the light of the body.  It too raises the problem of uncertainty in the relationship between Christ and the Christian, it too manifests or shows the brokenness of the relationship.  Likewise, the suggestion of the serpent in Gen. 3, the archetypal original sin is to the effect of introducing an element of uncertainty in the relationship between God and humankind.  “Did God say?” The single eye and the implied concentration of sight on the one thing that fills the body with light: but if the sight of the eye is not singular but divided the body is full of darkness. Here it is either or, not both and.

Throughout the history of God’s relationship with his people Israel the question is continually posed by prophet and judge to King and people concerning their vacillation as to the location of their trust – either in God who had promised himself to them as their God or  in other god’s or alliances of a political and military nature to protect and secure their lives.  The question was and is for Israel and the Church whether people would or would not allow God to be the God he had promised himself to be for them. So, Jeremiah laments the fact that Israel raises the question is God really God? “Is the Lord not in Zion? Is her King not in Her?” He then goes on to say that through and in the indifference of Israel God Himself suffers loss. “For in the wound of the daughter of my people my heart is wounded.” Jeremiah 8: 19 & 21.

And it is the same question raised by Jesus in the context of the fulfilment of that history of God’s relationship with Israel in Himself, as the Messiah of Israel, the Son of God who assumed flesh in order that he may take to his own heart the alienation, the estrangement, of God’s people.

The question which Jesus’ parable about the crooked book keeper poses for us is in relation to Jesus Himself: do we believe in the decisive action undertaken by God on our behalf.  Is this God really God for us? Is this journey of the Son of God into the far country for our sake, the shedding of His blood, the gratuitous violence of the Roman soldiers, the suffering the rejection, the abandonment by men and above all by God: is all this necessary for God to be our God? Is all this nastiness necessary, this divine self-humiliation, for the sake of God’s relationship with God’s own creation? The answer of course is that this is the way God has acted, there is no other way that human beings and creation can be recreated, than through this divine act of humiliation for our sakes, identifying himself with godforsakenness of the human condition?

The issues raised by Jesus words; the crooked employee who makes a risky but decisive decision to safeguard his future by committing a fraud on his employer, the issue of the single eye alone filling the body with light: these words of Jesus are about our attitude to God’s self-revelation in the most contradictory form of suffering, abandonment and death. Is this God God; if so, what does that mean in defining who we are in solidarity with all people in our wretchedness and alienation from God and each other? The singleness of our eye and the luminosity of light of who we are, depends on the risk we are prepared to take in making a decision, like the fraudster, about whether our life’s purpose and its future is determined  by acceptance or rejection of God’s action in Christ, the once for all fulfilment of his purposes, for Israel, the Church, and Christians, in the way of Jesus to the cross. Will we allow this God to be God?  Will we accept that we live as God’s people by this, his gracious judgement, alone. Luther’s sola gratia and sola scriptura mean precisely this. Here there is no middle pathway between faith and unbelief, light and darkness, Gospel and Law. In relationship to the truth which he brings there is only the possibilities of receiving Him as the truth of our life or not.  Here the possibilities are limited by this choice. It is the risk of faith or unbelief; the single eye, and the whole self full of light: or continuing to labour with our hearts divided and thus choose to live in the darkness of unbelief and guilt