What kind of person do you warm to? Someone who brags about their achievements and never seems to mess things up? Or someone who makes mistakes, but is quick to admit them and stands by you when the going gets tough? We can more easily identify with someone who is very human, can’t we? 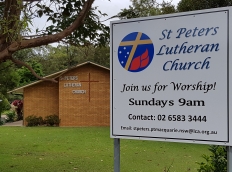 Someone who displays weaknesses common to many of us, and yet remains an inspiration to us. We may often wonder about the kinds of people Jesus calls to serve him.

They seem to us to be the most unlikely of candidates to achieve great things for Christ. Simon Peter was the most unlikely of candidates to lead a religious revolution. He’s been called ‘the apostle with the foot-shaped mouth’. Peter was eager and enthusiastic, bold and outspoken, with a habit of revving his mouth while his brain was still in neutral. Our four gospels are remarkably candid about the faults and failures of the first leaders of the Christian church. Their weaknesses and shortcomings aren’t smoothed over by some public relations expert.

Rather, the candid recording of erring disciples by Matthew, Mark, Luke and John is part of the evidence for the reliability of their narratives about our Lord. Both their strengths and weaknesses are revealed to us to give hope to all of us. In a sense, there are no great Christians, only the great grace of Christ, which is either eagerly embraced and used to make a life Christ-like, or is sadly neglected and underused. Our world isn’t looking for perfection from those of us who bear Christ’s name – it is looking for reality, for people who quickly admit what they’ve done wrong instead of blaming others for what’s happened. No Christian is a finished product. We’re all learners with a lifelong learning process still ahead of us to ‘grow in the grace and knowledge of our Lord Jesus Christ’, as St Peter urges us out of his own experience.

When Jesus called Peter to be his disciple, the life of Simon Peter the fisherman changed dramatically. He became not only the most prominent of Christ’s followers, but also later became the leader and principal spokesman of the fledgling Christian church. He’s a fascinating Christian because of his fallibility, and yet impetuous enthusiasm. Peter wasn’t born a giant of history, but became one through his lifelong love for Christ and his desire to cling to Jesus Christ, no matter what happened.

One day, when many of Jesus’ disciples deserted him, Jesus asked his 12 apostles: ‘Will you also go away?’ Simon Peter answered him, ‘Lord, to whom can we go? You have the words of eternal life. We have come to believe and know that you are the Holy One of God’ (John 6:67–69). In other words, Peter’s saying that he could not contemplate following anyone but Jesus. There’s no other option worth considering!

Christ called Peter to follow him when he was having no success in his work as a fisherman. When he obeyed Jesus, Peter had an extraordinary catch of fish. He instantly realised that he wasn’t just having good luck in fishing. Rather, in Christ, he was in the presence of a power beyond his comprehension. His immediate response was one of unworthiness. He fell down before Christ and said, ‘Depart from me, for I am a sinful man, O Lord’.

But Jesus didn’t depart. It was precisely such a person as Peter, a man who knew his own weakness and sinfulness, but could at the same time recognise and acknowledge the presence of God’s power that Christ wanted. Leaders are involved in the middle of the action. They are curious and love asking questions as did Peter. His readiness for adventure means he had the potential to be a great leader. He had the habit of opening his mouth when he should have opened his ears instead. From time to time, he didn’t fully understand what he himself was saying.

One such occasion was when Christ was transfigured in all his heavenly glory before his eyes. After Peter spoke, St Mark bluntly tells us that Peter didn’t know what to say! His great confession of faith in today’s gospel is all too soon followed by Peter’s unguarded and unthinking tendency to protest what Jesus says. As the proverb states: ‘Fools rush in where angels fear to tread!’ Jesus had just lavished great praise and blessing on Peter for his profound, Christ-centred confession of faith. Jesus then addresses Peter as a minister and says, ‘On this rock [that is, on this ministry] I will build my church’. Then Jesus adds the hope-filled, comforting and encouraging promise that the Gates of Hell can never overpower Christ’s church.

This promise has sustained and empowered the martyrs and missionaries of the church ever since. All the organised opposition and hostility towards Christ’s church will never wipe it out. Christ guarantees his bride, the church, will remain forever.

The first Director General of the BBC, Lord Reith, was visiting a group of people, preparing a radio program. One of the group members told Dr Reith what the program was all about. It was to be about ‘giving the church a decent burial’. ‘Young man’, Dr Reith responded, ‘the church of Jesus Christ will stand at the grave of the BBC’. We might add ‘and at the grave of every other secular organisation!’ Christ’s church is like an anvil that has worn out many hammers.

Jesus gave to Peter and the ministers of his church the ‘Office of the Keys’, that is, the authority to forgive the sins of those who repent. Peter would especially treasure his own forgiveness by Christ, and his rehabilitation at Easter after Peter had so cruelly denied he ever knew Jesus. Prior to his denial of Jesus, Peter was super-confident that he alone would never deny our Lord. No thoughtful Christian will want to point an accusing finger at Peter, because the depths of his failure to be faithful to his Lord is matched by the depth of his repentance when he realised what he’d done. When Jesus turned to look at him, Peter went out and wept bitterly. Peter repented because Jesus prayed for him.

An alcoholic had been sober for a number of years. He was asked what the secret was to his recovery. He replied, ‘As simple as it sounds, it was the hardest lesson for me to learn. Every time I crave a drink, the last thing in the world I want to do is pray. I will do anything not to pray. But I finally discovered that when the pressures build up to get drunk and go on a binge, if I will force myself to pray for five minutes, the temptation will fade away. But you don’t know how hard that is. When a man needs a drink, the last thing he wants to do is pray about it’.

Peter learned that same lesson in the Garden of Gethsemane when he failed to join our Lord Christ in prayer. In his two letters, where he shares with us all the marvellous things he learned from our Lord, Peter writes, ‘Keep sane and sober for your prayers’ (1 Peter 4:7). He starts his first letter off with the marvellous difference Christ’s resurrection can make for all of us. He writes, ‘Blessed be the God and Father of our Lord Jesus Christ! By his great mercy, he has given us a new birth into a living hope through the resurrection of Jesus Christ from the dead, and into an inheritance that is imperishable, undefiled, and unfading, kept in heaven for you, who are being protected by the power of God through faith for a salvation ready to be revealed in the last time’ (1 Peter 1:3–5).

In St Peter, the New Testament gives us a portrait of a disciple who, through weakness, was made strong. In our weakness, we too can discover Christ’s strength and the inexhaustible sufficiency of his grace. Jesus says, ‘My grace is sufficient for you, for my power is made perfect in weakness’ (2 Corinthians 12:9).

The life of St Peter reminds us that church leaders are weak and human like every other Christian and need the prayers of their people for their ministry to be truly blessed by Christ. When Christ called Peter the ‘rock’, he was referring to what Peter would become. Christ views all of us in light of what we can still become by his grace alone. Thank God for that mercy! Instead of sacking us when we fail, our Lord Jesus longs to forgive us and recommission us for his service.

What a marvellous incentive that is – to continue in the work of the Lord knowing that in the Lord, our labour is not in vain. Amen.