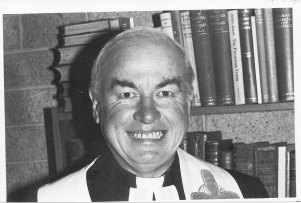 a good man and taught some important ethical maxims which are as relevant today as they were there and then. But stumble at the thought that this good man who was crucified for his teaching was revealed in His resurrection as the Son, the only Son, of the eternal God through whom the world came to be. Who post his resurrection was given the title Lord, (which was the Greek translation of the Old Testament name for God. ( יהוה Translated as Yahweh but written as an unpronounceable word by the human larynx in Hebrew to safeguard God’s holiness from defilement.) The early Christians addressed this man in prayer as Lord

During the 40 days after His resurrection the disciples came to see that He had been always with them as the Lord God, in a form that was veiled for them. During the 40 days the presence of God in the man Jesus was no longer a paradox to them He was no longer the hidden God. But now they see as St Paul declares, ‘God was in Christ’ (2 Cor 5:19) He had been veiled as he had moved among His disciples, but now he was unmistakably revealed to be who He is, as the only Son of the Father. Their doubts and unbelief were dispelled, never to return.

For the disciples this was not a discovery of their own, the resurrection for them was not a self-evident truth. It was a conviction that went entirely against the grain for them . This is made abundantly evident in the resurrection narratives that they have given to us. The resurrected Jesus not only speaks with binding authority and effectiveness, but with truth and power. Such that his speech was able to overcome, the fears the grief, the bewilderment and doubts, the unbelief of the disciples. They came to see and believe that the resurrection was not a resuscitation of a miracle worker but a creative act whose only parallel is the creation of the world. It was a creation out of nothing of the dead body of the man Jesus who as the veiled  Son  of God had died with the desperate cry of dereliction upon His lips ‘My God, My God, how have you forsaken Me?’ (Matthew 27:46) Being in this way the representative human for all sinners since the creation of Adam. And so, St Paul unhesitatingly declares in (1Cor 15:17) that if this dead Son of God is not raised from the dead the Christian faith is vain. It has nothing to say to the world caught is the deadly web of its sin and estrangement from God. If there is no resurrection you are still in your sins and of all people Christians are the most miserable and of all people most to be pitied. (vs. 17-19)

One of the striking things about the New Testament’s account of the resurrection of Jesus Christ from the dead is that in the most artless way its writers do not attempt to give a coherent account of it. They do not in any way attempt to say what the resurrection as an event is. They tell us of the signs associated with it, such as the empty tomb, but remain silent as to the nature of the resurrection as such. Their historical narratives as we have them in the New Testament cannot be reconciled as to chronology or geography; and no one thought it appropriate or necessary in the early church to reconcile, to iron out these differences, to cover up these discrepancies. In this manner they simply point in their own way to their own incomprehension concerning the event to which they bear testimony

The gospel  (St John 20) speaks of Mary and Thomas in relation to the appearance to the disciples of the risen Lord. The doubt of Thomas with which his name has become associated, doubting Thomas; his doubt is no wit different from all the other disciples in relation to Jesus’ resurrection. As was Mary’s confusion about the stranger who greeted her on the first resurrection day

All the accounts of Jesus post resurrection appearances demonstrate the fact that Jesus created the disciples’ faith. We can speak of the disciples’ faith in the risen Lord only in the sense in which their unbelief is overcome by the action of Jesus. So, St. Thomas’ doubt and his subsequent faith is not a unique experience in respect to the other apostles. The circumstances in which Thomas comes to faith are his, but Jesus creates his faith, like that of all the other disciples as he overcomes doubt by His own action. Jesus’ resurrection far from being a belief  created by the disciples’ ability to believe the unbelievable, it in itself is the foundation of their faith.

Jesus says they are blessed who unlike Thomas ‘have not seen and yet believe.’ The blessedness of which Jesus speaks is the fact that all those,  apart from the apostles, who are not witnesses of the resurrection have no possibility of touching or handling Jesus the resurrected One, as they did. The blessedness of which Jesus speaks is that all others, that includes us, apart from the apostles, have simply the Apostolic word of testimony and the promised Holy Spirit as the basis of their faith, their union with Jesus.

Unlike Thomas and the other disciples including Mary of Magdala, these others of whom Jesus speaks do not face the temptation to which they were subject. This is the temptation, it consisted in their wanting to know that the truth of their faith in Jesus as the risen Lord could be established for them by something other than Jesus own word of promise. Their request to touch the resurrected Jesus indicates their desire to settle the truth of their belief in Jesus Lordship by their ability to trust their physical sense of touch.

But also, Mary Magdalene, whom Jesus met in the garden near the tomb, there we read, Jesus refused to let her touch Him, to have a direct relationship with Him, this meeting also speaks to us of the same question., faced by Thomas on that evening in Jerusalem so long ago when, on that first Easter Day where the disciples gathered behind closed doors for fear of the Jews. The temptation of Thomas and Mary consisted in their wanting to know that the truth of their faith in Jesus as the risen Lord could be established for them by something other than Jesus own word of promise.

The apostles, and Thomas and Mary in particular, show how they were caught in the natural dilemma of wanting to seek a foundation for their faith in something other than Jesus’ word of promise to them concerning Himself.

We, on the other hand, hear a word of promise that comes to us from the apostolic witness of the scriptures. This word invites us to place our confidence in the One to whom they testify as the Lord of life. We are invited to obey the promise of this One whose word bears witness to Himself, that He is the risen victor of Gethsemane and Golgotha. This word of promise invites us to believe that Jesus is who He is for us; and that this is the only basis for understanding the truth of our faith. The certainty of our faith lays precisely in the uncertainty that we have in our selves. Certainty consists in the veracity of the word of promise that we hear from the One speaks it to us, as it is given to us in the scriptures. He it is who alone creates for us the basis and certainty of faith. Unlike St. Thomas we have no possibility of establishing our faith by believing in the veracity our senses by touching Jesus and thus, like Thomas, attempt to find an independent point of reference for the truth of Jesus word.

It is for this reason that Jesus calls those who have not seen or touched him blessed. ‘Blessed are those who have not seen and yet believe’ (John 20:29); we unlike Thomas are given the freedom to obey the Word of Jesus as the sole basis of faith. In this word and nothing else we find the truth of our life. This truth is no abstract proposition, but the truth of our life before God and each other, as grounded in Him who was raised by God for our sake. This means we  recognise the truth of our life before God and each other is established not by us but for us. That means Another establishes our faith as Christians: it is the Lord who promises Himself to us as the One who lives and pleads our cause as the crucified One. It is as we acknowledge His truth to be our truth that Jesus says we are blessed. It is this mystery of grace that we celebrate today by the means Jesus has given to us. His very body and blood which, given and received, makes us to be what we are not naturally, beloved children of the Father upon whom  for the sake of His risen crucified Son, He has set his love.