Who is he? A nice guy? An inspiring teacher? A social reformer? Many of his 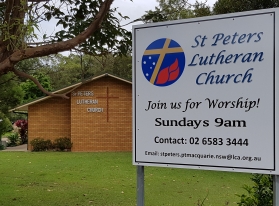 opponents thought he was demon-possessed and raving mad. Who is he?

The question isn’t whether Jesus existed or not. There is too much ancient evidence—even from non-Christian sources such as the Jewish historian Josephus and Roman historian Tacitus—to be able to dismiss the fact that Jesus lived on earth. Even a recent internet study declared Jesus to be the most famous person on earth .

Yes, Jesus’ life on earth is well documented. But who is this carpenter from Nazareth; the son of Joseph and Mary? Just before our text today, Jesus himself had asked his disciples this very question: “Who do the people say that I am?” They answered, “Some say John the Baptist; but others say, Elijah; and others, that one of the prophets has risen. “But what about you?” Jesus asked them. “Who do you say I am?”

“Who do you say I am?” That is Jesus’ question to you also. The most important question anyone will ever be faced with.

Who is Jesus? Today Luke takes us to the mountaintop with Jesus, Peter, James and John for the most dazzling show and tell presentation ever. As Jesus was praying, the appearance of his face changed, and his clothes became as bright as a flash of lightning. Two men, Moses and Elijah, appeared in glorious splendour, and were talking with him.

For Luke’s original audience, familiar with the Old Testament and longing for the Messiah it pointed to, this conversation with Moses and Elijah is most significant. In Exodus 24, it was Moses who took three companions (Aaron, Nadab and Ahibu) up the mountain to meet with God where the appearance of the glory of the LORD was like a devouring fire on the top of the mountain. A cloud covered the mountain and Moses went up into it and there God spoke to him. Afterwards Moses’ face shone after being in God’s presence. And it was believed by the people of old that Elijah would literally return as the forerunner to the coming of the Saviour, based on what the prophet Malachi had said: “See, I will send you the prophet Elijah before that great and dreadful day of the LORD comes.” (Malachi 4:5).

So Luke tells us that there on the Mount of Transfiguration, Elijah stands in the presence of the Saviour his return was supposed to herald. Moses, also, stands in the presence of one who is greater than he. For whereas Moses could only give the Ten Commandments—which cannot save us but only show us how much we need a Saviour—Jesus has brought his saving help to the world by fulfilling them perfectly for all people, and freeing us from the condemnation of the law with his sacrificial death, to win forgiveness of sins for the life of the world.
This is the ‘departure’ which Jesus was about to bring to fulfillment at Jerusalem, which Moses and Elijah were speaking with him about—his betrayal, arrest, trial and crucifixion where he bore the sins of the world on his shoulders. This is what Jesus had already explained to his disciples himself, just before today’s text: that he must suffer many things, be rejected by the elders, the chief priests and the teachers of the law, and that he must be killed and on the third day be raised to life.
But his disciples didn’t understand. Jesus’ talk of his departure seemed impossible. It all sounded like such a defeat—as today’s colloquial language would put it—“an epic fail.” Up until this point, Jesus had brought people freedom, life, hope and peace by miraculously triumphing over the forces of nature, the demonic realm, sickness and even death itself. If he had overcome even death how could he now possibly succumb to it? They didn’t understand that Jesus could only be the Saviour of the world by taking our place on the Cross, dying to save us.

So the disciples are given a fleeting revelation of Jesus’ glory to assure them about Jesus’ identity and mission. Jesus was shown plainly to be much more than merely a special person; a good moral teacher or social revolutionary—but in Christ, the glory of God has come to earth and is in the midst of his people. He is not merely Joseph and Mary’s son, but the Son of God from all eternity, confirmed by the booming voice from heaven: “This is my Son whom I have chosen, listen to him.”

This fleeting revelation of Jesus’ divine glory was to assure the disciples that even though he would be handed over to the ruling authorities to unjustly suffer and die, this was no failure—in fact the very way he would conquer sin, death and the devil. His death would not end with death, but with his resurrection, and new life with God for all those who trust in him. All that was shown on the mount of Transfiguration, preserved for us in today’s Gospel text—the presence of the key Old Testament figures Elijah and Moses, the mountain, the glory cloud, the voice of God, Jesus’ shining face and garments—all powerfully show that Jesus is the fulfilment of everything that God had promised his people from of old.

Peter said to Jesus: “Master, it is good for us to be here. Let us put up three shelters–one for you, one for Moses and one for Elijah.” Peter was right. It was good to be there, in the presence of the Saviour of the world. But Peter hasn’t listened. He can’t hang on to the moment. They can’t have glory without the Cross. Jesus must continue on the pathway of God’s mission and go to Jerusalem to suffer and die for the sins of the world, and restore the world to God through his own precious blood. Just as he did with Moses and his companions from ancient days, God again speaks to those on the mountain top. “This is my Son, whom I have chosen” he says of Jesus. “Listen to him.”

We’ve heard the profound connections that the Old Testament has with our text today, showing God’s glory in Jesus, and Jesus being the fulfilment of all that was promised. Yet there is a noticeable difference too. In Exodus, when Moses went up on the mountain, and the glory of the LORD dwelt on Mount Sinai, the cloud covered it six days. And on the seventh day God called to Moses out of the midst of the cloud (Exodus 24:15-16).

Seven days. That reminds us of the six days of creation and God’s resting on the seventh day—the pattern of our 7 day week. Yet in today’s text Luke speaks of 8 days. It was about 8 days after Jesus had spoken of his death and resurrection that he went up the mountain with Peter, John and James.

In the theological journal First Things, Dale Coulter explains: “…the eighth day signals a day that is beyond the seven-day cycle of weeks and thus stands outside of the normal movement of time. It is the dawn of a new age in which time comes to be fulfilled in a kind of eternal stable movement around God. This kind of talk about the eighth day underscores the in-breaking of the divine into the movement of history to bring it to a final consummation.” In simple terms, the 8th day represents Gods eternal ‘out of this world’ realm that is beyond our worldly time of 24 hours 7 days a week.

Who is Jesus? The dazzling manifestation of his glory and the mention of 8 days shows he is the Son of God from all eternity; the Christ in whom God’s 8th day of eternal reign of glory and grace has come into our world that is trapped in bondage to sin, death and decay. Although we don’t have the sound and light show that the disciples did on the Mount of Transfiguration in our Gospel reading, we don’t have to ascend the mountain to find God.

He comes down to us. While we gather in this simple church building, we don’t see Jesus in radiant glory with clothes as bright as a flash of lightning. Nonetheless, God who is present everywhere is personally present here working in a special way unlike anywhere else. He brings his grace and divine help and salvation through his word, through baptism and Holy Communion, bringing divine forgiveness, favour, help and blessing for us.

And so it is good for us to be here…in the presence of Christ who faithfully followed his Father’s will all the way to the Cross, suffering and dying for the sins of the world, and triumphing over death with his mighty resurrection. Here, and now, in the Person of the risen, crucified Christ, the 8th day that is God’s reign of grace and his realm of eternity comes into our world and our time, and the Christ continues to bless his people.

Even though he is invisible to human eyes Jesus stands before us, in the fullness of his glory, at the font. It is not the pastor that baptises a person, but really it is Jesus. That is why from the earliest times, baptism fonts were Octagonal in shape—with 8 sides, symbolising the reality that by baptism into Christ, God brings about a new creation; ransoming sinners from the prison of sin, death and hell and bringing them into his kingdom of light and life, giving them ears to hear God’s word and mouths to proclaim it, recreating hearts to love and serve him, and incorporating them into the eighth day of Jesus’ resurrection, and eternal life.

That is what he did for all of us in our baptism. But baptism is not a magic act that saves apart from faith. Baptism and faith go together. Baptism is the means by which God promises to send his Spirit to begin the work of faith that justifies us in God’s presence; faith that must be nurtured throughout life. Faith that comes from gladly hearing and learning God’s word.

And so it is vital that we all keep coming to continue to listen to Jesus, for if we keep firm in our faith by continuing to listen to him, we share in everything that he promises, and what Peter James and John saw in today’s Gospel reading is a preview of what we will see. Through faith in Christ, we will be in the company of Moses and Elijah and Peter and James and John, and all the saints throughout time. Through faith in Christ, we will see his shining face and clothes as white as lightning. We will see our Saviour in all his glory, not just for a fleeting glimpse, but for all eternity. Amen.